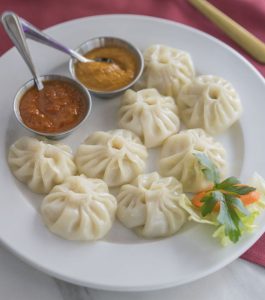 The Momo embodies many cultures into a single entity. The Momo and its origins trace back to small villages spread throughout Tibet and the rugged terrain of The Himalayas. This succulent dish has reached a level of notoriety on the streets, often matching the success of other street foods of other cultures. Momos itself can be viewed as the pinnacle of versatility, such that
it has many variations of itself. The Momo can come in a variety of style ranging from a spicy, robust C-momo, Pan fried- Kothey Momo, or Deep fried and Open faced Momos.

The Wrappers for Chicken Momo
The body of the Momo, most typically is made with wheat our, though variations can be found. Once the base dough has been made it’s mixed with water and then attened into circular or square shaped wrappers. With the rise of Momos and Dumplings alike, wrappers can be found conveniently at supermarkets.

The Flling for Chicken Momo
With its versatility The Momo can be filled with a myriad of succulent offerings, though most popularly Fillled with Ground chicken, Onions, Garlic, Ginger, Cilantro and a slew of Nepalese Spices.
The fillling itself is enclosed in the wrapper, Often times in a round or crescent shape. Once Wrapped it is then steamed and plated, paired with sauces that complement the Momo.
The best way to eat Chicken Momo is to dip it in the sauce without puncturing any hole in it.

Spice Level
The Momos themselves are often times prepared Mild, Meaning little to no spice. The trick comes with what sauce is paired with the Momos. Lending itself to be subjected to a slew of opportunities. Customers generally preferred Chicken Momo MEDIUM heat. Kids love it mild.

Popularity
Chicken Momo or momos are one of the most the popular dishes in Nepal. It can be found in high scale restaurants, local family dining as well as at every corner of the city.

How to order
Chicken Momo can be ordered as a starter to munch on with a beer or a cocktail. It is the perfect for kids that prefer mild food.

Beer(w/spicy) : Haward 5000, Taj Mahal, King Fisher PS: (Complementary drinks above are not FREE. It is only to highligt the drinks that go best with this food.)

How to eat
Traditionally Chicken momo or momos are eaten without interrupting the overall shape. It should be eaten hot and as a whole with sauce as a cooler for the Momo. More often than not, Momo sauces are served cold as to not overwhelm the eater with heat.

Origin
Momo or momos are a traditional delicacy in Tibet, Bhutan, Sikkim, and Nepal. It is one the most popular fast food in those regions. It is also common in places with noticeable Nepalese diaspora,  such as Assam, Mizoram, Manipur, Nagaland, Meghalaya, Himachal Pradesh, and West Bengal (particularly in Darjeeling ). Over the last decade momo or momos have become a very popular  street food in many Nepali cities.